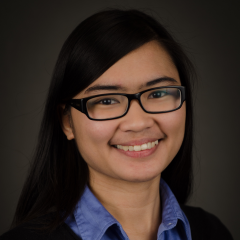 Aseismic deformation has been suggested as a mechanism to release the accumulated strain in rifts. However, the fraction and the spatial distribution of the aseismic strain are poorly constrained during amagmatic episodes. Using Sentinel‐1 interferograms, we identify the surface deformation associated with the 2014 Mw5.2 Karonga earthquake, Malawi, and perform inversions for fault geometry. We also analyze aftershocks and find a variety of source mechanisms within short timescales. A significant discrepancy in the earthquake depth determined by geodesy (3–6 km) and seismology (11–13 km) exists, although both methods indicate Mw5.2. We propose that the surface deformation is caused by aseismic slip from a shallow depth. This vertical partitioning from seismic to aseismic strain is accommodated by intersecting dilatational faults in the shallow upper crust and sedimentary basin, highlighting the importance of considering aseismic deformation in active tectonics and time‐averaged strain patterns, even in rifts with little volcanism. Plain Language Summary: During the early stages of continental rifting, some accumulated tectonic energy is released with little or no earthquake activity (i.e., aseismic strain). This is most often observed in places where magma intrusion occurs. However, in rift basins lacking evidence of magma intrusion, how much and where the aseismic strain is released remains largely unknown. We investigate a magnitude 5.2 earthquake that occurred in 2014 near Karonga, Malawi, using both local seismic data and satellite ground deformation data. Our analyses show that although the main earthquake and other aftershocks ruptured at ∼12 km deep, the surface deformation is caused by an aseismic source from a shallower region (3–6 km deep). The aftershocks occur seconds to minutes apart and have different rupture sources, suggesting a highly damaged zone. The depth discrepancy between earthquake locations and the aseismic energy source might be caused by a weak, damaged layer where many faults intersect. Since intersecting faults are common in rift systems, our study suggests that this depth discrepancy might be common as well, indicating a large portion of energy released as aseismic strain in a continental rifting system.

Continental rifts are important sources of mantle carbon dioxide (CO2) emission into Earth’s atmosphere1–3. Because deep carbon is stored for long periods in the lithospheric mantle4–6, rift CO2 flux depends on lithospheric processes that control melt and volatile transport1,3,7. The influence of compositional and thickness differences between Archaean and Proterozoic lithosphere on deep-carbon fluxes remains untested. Here we propose that displacement of carbon-enriched Tanzanian cratonic mantle concentrates deep carbon below parts of the East African Rift System. Sources and fluxes of CO2 and helium are examined over a 350-kilometre-long transect crossing the boundary between orogenic (Natron and Magadi basins) and cratonic (Balangida and Manyara basins) lithosphere from north to south. Areas of diffuse CO2 degassing exhibit increasing mantle CO2 flux and 3He/4He ratios as the rift transitions from Archaean (cratonic) to Proterozoic (orogenic) lithosphere. Active carbonatite magmatism also occurs near the craton edge. These data indicate that advection of the root of thick Archaean lithosphere laterally to the base of the much thinner adjacent Proterozoic lithosphere creates a zone of highly concentrated deep carbon. This mode of deep-carbon extraction may increase CO2 fluxes in some continental rifts, helping to control the production and location of carbonate-rich magmas. Carbon dioxide and helium data support lateral advection of carbon-rich cratonic mantle below the East African Rift System, which concentrates deep carbon and causes active carbonatite magmatism near the craton edge.

Although the deep, wide basins of the Western rift, Africa have served as analogues for the evolution of half-graben basins, the geometry and kinematics of the border, intrabasinal, and transfer fault systems has been weakly constrained. Despite the > 100 km-long fault systems bounding basins, little was known of seismicity patterns, or the potential for M > 7.5 earthquakes. Using our new local earthquake database from the 2013-2015 SEGMeNT seismic array (57 onshore, 32 lake-bottom stations) and TANGA14 (13 stations), we examine the kinematics and extension direction of the Rungwe volcanic province and northern Malawi rift. We relocated earthquakes using a new 1D velocity model, and both absolute and double-difference relocation methods. Local magnitudes of 1178 earthquakes within the array are 0.7 < ML < 5.2 with a b-value 0.77 ± 0.03, and magnitude of completeness ML 1.9. Focal mechanism solutions for 63 earthquakes reveal predominantly normal and oblique-slip motion, and full moment tensor solutions for ML 4.5, 5.2 earthquakes have centroid depths within 2 km of catalog depths. The preferred nodal planes dip more than 40o from surface to >25 km depths. Extension direction from local earthquakes and source mechanisms of teleseismically-detected earthquakes are approximately N58oE and N65oE, respectively, refuting earlier interpretations of a NW-SE transform fault system. The low b-value indicating strong coupling across crustal-scale border faults, border fault lengths >100 km, and evidence for aseismic deformation together indicate that infrequent M > 7.5 earthquakes are possible within this cratonic rift system.

In December, 2009, a rare sequence of earthquakes initiated within the weakly extended Western Rift of the East African Rift system in the Karonga province of northern Malawi, providing a unique opportunity to characterize active deformation associated with intrabasinal faults in an early-stage rift. We combine teleseismic and regional seismic recordings of the largest events, InSAR imagery of the primary sequence, and recordings of aftershocks from a temporary (4-month) local network of six seismometers to delineate the extent and geometry of faulting. The locations of 1/41900 aftershocks recorded between January and May 2010 are largely consistent with a west-dipping normal fault directly beneath Karonga as constrained by InSAR and CMT fault solutions. However, a substantial number of epicentres cluster in an east-dipping geometry in the central part of the study area, and additional west-dipping clusters can be discerned near the shore of Lake Malawi, particularly in the southern part of the study area. Given the extensive network of hanging wall faults mapped in the Karonga region on the surface and in seismic reflection images, the distribution of events is strongly suggestive of multiple faults interacting to produce the observed deformation, and the InSAR data permit this but do not require it. We propose that fault interaction contributed to the seismic moment release as a series of M w 5-to-6 events instead of a normal main shock-aftershock sequence. We find the depth of fault slip during the main shocks constrained by InSAR peaks at less than 6 km, while the majority of recorded aftershocks are deeper than 6 km. This depth discrepancy appears to be robust and may be explained by fault interaction. Structural complexities associated with fault interaction may have limited the extent of coseismic slip during the main shocks, which increased stress deeper than the coseismic slip zone on the primary fault and synthetic faults to the east, causing the energetic aftershock series. There is no evidence of deformation at the Rungwe volcanic province 1/450 km north of the earthquake sequence between 2007 and 2010, consistent with previous interpretations of no significant magmatic contribution during the sequence.

Strain in magmatic rifts is accommodated by both faulting and dike intrusion, but little is known of the frequency of dike intrusions in early-stage rifts. We use a new earthquake data set from a dense temporary seismic array (2013–2014) in the ~7-Myr-old Magadi-Natron-Manyara section of the East African Rift, which includes the carbonatitic Oldoinyo Lengai volcano that erupted explosively in 2007–2008. Full moment tensor analyses were performed on M > 3.4 earthquakes (0.03- to 0.10-Hz band) that occurred during the intereruptive cycle. We find two opening crack-type and various non-double-couple earthquake source mechanisms and interpret these as fluid-involved fault rupture. From waveform analysis on the nearest permanent seismic station, we conclude that similar rupture processes probably occur over eruptive and intereruptive cycles. The repeated and dynamically similar fluid-involved seismicity, along with intrabasinal localization of active deformation, suggests that significant and persistent strain is accommodated by magmatic processes, modulated by tectonic cycles.

Unusually deep earthquakes occur beneath rift segments with and without surface expressions of magmatism in the East African Rift system (EARS). The Tanganyika rift is part of the Western rift and has no surface evidence of magmatism. The TANG14 array was deployed in the southern Tanganyika rift, where earthquakes of magnitude up to 7.4 have occurred, to probe crust and upper mantle structure and evaluate fault kinematics. 474 earthquakes detected between June 2014 and September 2015 are located using a new regional velocity model. The precise locations, magnitudes and source mechanisms of local and teleseismic earthquakes are used to determine seismogenic layer thickness, delineate active faults, evaluate regional extension direction, and evaluate kinematics of border faults. The active faults span more than 350 km with deep normal faults transecting the thick Bangweulu craton, indicating a wide plate boundary zone. The seismogenic layer thickness is 42 km, spanning the entire crust beneath the rift basins and their uplifted flanks. Earthquakes in the upper mantle are also detected. Deep earthquakes with steep nodal planes occur along subsurface projections of Tanganyika and Rukwa border faults, indicating that large offset (≥ 5 km) faults penetrate to the base of the crust, and are the current locus of strain. The focal mechanisms, continuous depth distribution, and correlation with mapped structures indicate that steep, deep border faults maintain a half‐graben morphology over at least 12 My of basin evolution. Fault scaling based on our results suggests M > 7 earthquakes along Tanganyika border faults are possible.

Although magmatism may occur during the earliest stages of continental rifting, its role in strain accommodation remains weakly constrained by largely 2-D studies. We analyze seismicity data from a 13 month, 39-station broadband seismic array to determine the role of magma intrusion on state-of-stress and strain localization, and their along-strike variations. Precise earthquake locations using cluster analyses and a new 3-D velocity model reveal lower crustal earthquakes beneath the central basins and along projections of steep border faults that degas CO2. Seismicity forms several disks interpreted as sills at 6-10 km below a monogenetic cone field. The sills overlie a lower crustal magma chamber that may feed eruptions at Oldoinyo Lengai volcano. After determining a new ML scaling relation, we determine a b-value of 0.87±0.03. Focal mechanisms for 65 earthquakes, and 13 from a catalogue prior to our array reveal an along-axis stress rotation of ∼60° in the magmatically active zone. New and prior mechanisms show predominantly normal slip along steep nodal planes, with extension directions ∼N90°E north and south of an active volcanic chain consistent with geodetic data, and ∼N150°E in the volcanic chain. The stress rotation facilitates strain transfer from border fault systems, the locus of early-stage deformation, to the zone of magma intrusion in the central rift. Our seismic, structural, and geochemistry results indicate that frequent lower crustal earthquakes are promoted by elevated pore pressures from volatile degassing along border faults, and hydraulic fracture around the margins of magma bodies. Results indicate that earthquakes are largely driven by stress state around inflating magma bodies.

Deformable optical elements may be physically altered through fluid displacement. We imprint a grating surface onto an elastomeric membrane by soft lithography. The membrane is installed as a flexible wall of a sealed fluidic chamber. Injection of excess fluid into the chamber induces expansion of the membrane, effectively varying the groove spacing of the imprinted grating. In transmission experiments using a broadband light source, we are able to achieve a 127.2-nm shift in peak wavelength with an injected fluid volume of 0.56 ml. A paraboloid model of the change in curvature of the grating during expansion accurately describes our experimental results.

A fluidic chamber with an elastomeric grating membrane is fabricated. Grating groove spacing is modified through membrane deformation via fluid injection. Tunable diffraction output is demonstrated. At normal incidence, the diffraction angle changes by 14.2° and 9.8° for incident wavelengths 632.8 and 488 nm, respectively, with an injected fluid volume of 1 ml.