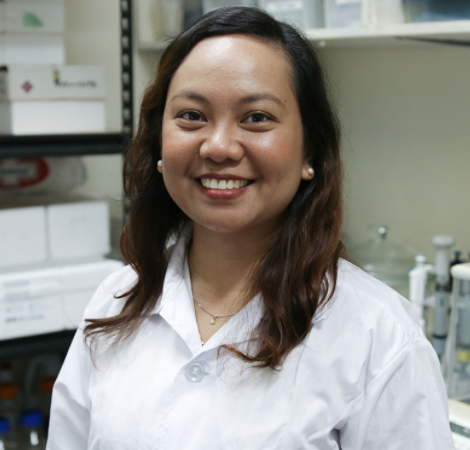 Doctor of Philosophy in Mechanical and Environmental Informatics, Tokyo Institute of Technology, 2016

Master of Science in Marine Science, University of the Philippines, Diliman, 2012

Bachelor of Science in Chemistry, University of the Philippines, Diliman, 2004

The sequestration of anthropogenic carbon dioxide in the form of organic carbon and its eventual deposition in the sediments is an important component of the marine carbon cycle. In the Sulu Sea, Philippines, organic carbon contents in the sediments have been relatively well studied, but the processes that describe the organic carbon distributions in the water column have not been elucidated. Dissolved and particulate organic carbon (DOC, POC) concentrations were measured at several stations in the Sulu Sea during the northeast monsoon of 2007/2008 to understand the dynamics of organic carbon in this unique internal sea. Analyses of primary productivity estimates, beam attenuation coefficient (at 660 nm) profiles, and correlation coefficients among DOC, POC and other parameters (e.g., apparent oxygen utilization) at different layers of the water column indicate that surface primary productivity, upwelling, bottom intensified flows across sills, and ventilation from shallow sills, which may contain semi-labile DOC that is estimated to largely contribute to microbial respiration in the bathypelagic layer, are the major processes that affect the DOC and POC distributions in the Sulu Sea. The variability of these processes should be taken into consideration when assessing the sustainability of internal and marginal seas as carbon sinks.

To further understand dissolved carbon dioxide (CO2) dynamics and the link between surface productivity and carbon content in the sediments of the Sulu Sea, seawater samples were obtained from high and low productivity areas during the northeast monsoon of December 2007/January 2008, which also corresponded to a period of weak La Niña. CO2 concentrations in surface waters of the Sulu Sea are mostly governed by productivity, while sub-surface CO2 concentrations are influenced by physical processes including vertical mixing and bottom-intensified flow southwest of Mindoro and Panay Straits (central Philippines), and upwelling off the west coast of Zamboanga in Mindanao (south Philippines). These physical processes are manifested in the downward sloping isolines of carbonate parameters near the straits and weak upwelling of waters saturated with respect to atmospheric CO2. Deep waters ventilated from the Sulu Sea have lower dissolved inorganic carbon (DIC) and total alkalinity (TA), and higher pHT (pH in the total scale) and carbonate ion concentrations (CO3²⁻) than the deep waters of the South China Sea. Nevertheless, TA in the deep waters of the Sulu Sea increases below 2000m at almost twice the rate as DIC, suggesting possible dissolution of sedimentary CaCO3. A small positive "excess" alkalinity signal is observed in the South China Sea but negative values in the Sulu Sea may reflect the possible contribution of organic acids. This study suggests that the upwelling area within the Sulu Sea, albeit limited in size, could be a source of CO2 to the atmosphere especially during the stronger northeast monsoon periods. Other processes such as dissolution of CaCO3 in the sediments and possible organic acidity should be considered in understanding the Sulu Sea's CO2 sink capacity for the coming years.

Article title: Phosphorus as a driver of nitrogen limitation and sustained eutrophic conditions in Bolinao and Anda, Philippines, a mariculture-impacted tropical coastal area

The dynamics of nitrogen (N) and phosphorus (P) was studied in mariculture areas around Bolinao and Anda, Philippines to examine its possible link to recurring algal blooms, hypoxia and fish kills. They occur despite regulation on number of fish farm structures in Bolinao to improve water quality after 2002, following a massive fish kill in the area. Based on spatiotemporal surveys, coastal waters remained eutrophic a decade after imposing regulation, primarily due to decomposition of uneaten and undigested feeds, and fish excretions. Relative to Redfield ratio (16), these materials are enriched in P, resulting in low N/P ratios (~ 6.6) of regenerated nutrients. Dissolved inorganic P (DIP) in the water reached 4 μM during the dry season, likely exacerbated by increase in fish farm structures in Anda. DIP enrichment created an N-limited condition that is highly susceptible to sporadic algal blooms whenever N is supplied from freshwater during the wet season.

A model incubation experiment using natural zooxanthellate corals was conducted to evaluate the influence of phosphate uptake by coral holobionts on oxygen isotope ratio of dissolved PO43− (δ18Op). Live coral samples of Acropora digitifera, Porites cylindrica, and Heliopora coerulea were collected from coral reefs around Ishigaki Island (Okinawa, Japan) and Bolinao (northern Luzon, Philippines) and incubated for 3–5 d after acclimatization under natural light conditions with elevated concentrations of PO43–. Phosphate uptake by corals behaved linearly with incubation time, with uptake rate depending on temperature. δ18Op usually increased with time toward the equilibrium value with respect to oxygen isotope exchange with ambient seawater, but sometimes became higher than equilibrium value at the end of incubation. The magnitude of the isotope effect associated with uptake depended on coral species; the greatest effect was in A. digitifera and the smallest in H. coerulea. However, it varied even within samples of a single coral species, which suggests multiple uptake processes with different isotope effects operating simultaneously with varying relative contributions in the coral holobionts used. In natural environments where concentrations of PO43– are much lower than those used during incubation, PO43– is presumably turned over much faster and the δ18Op easily altered by corals and other major primary producers. This should be taken into consideration when using δ18Op as an indicator of external PO43– sources in coastal ecosystems.

Malampaya Sound is an enclosed bay in Palawan, Philippines. A salinity maximum or salt plug was discovered in the middle of the Sound by a field survey in May 2005 and successfully simulated using a Delft3D numerical model of the sound, forced with tide and freshwater discharge at the lateral boundaries, and evaporation at the surface. Different conditions to simulate the major monsoonal regimes of 2005 (dry inter-monsoon, southwest-wet, and northeast-dry) indicate that the salt plug persists, although its relative position changes with the magnitude of freshwater discharge. The salt plug effectively limits the exchange of water between the Inner and the Outer Sound, which may account for differences in nutrient levels and the phytoplankton assemblage during the same survey. Such a thermohaline circulation has important consequences for sediment transport, phytoplankton bloom formation, and accumulation of pollutants in the Sound.